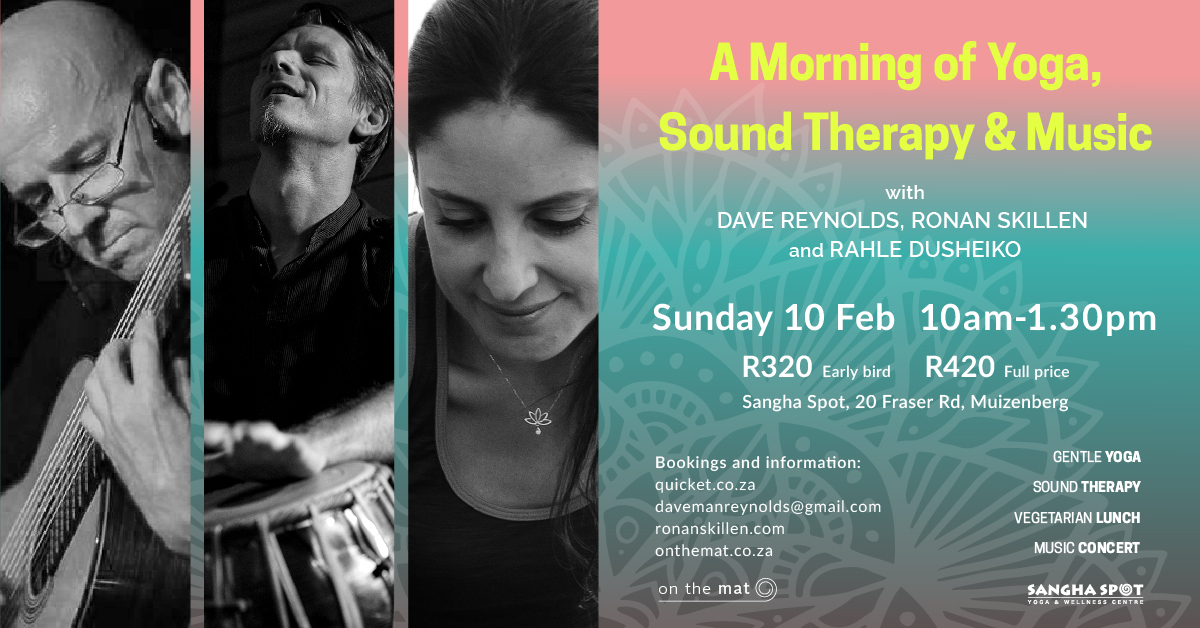 I’m excited to be collaborating on another Yoga and Sound day with Dave Reynolds. This time we have the privilege of Ronan Skillen being involved to take the morning to a whole new level. See details below, booking is limited to only 20 people so make sure you book soon.

Bookings are made through Quicket – here is the link to book.

Bring: A cushion and a blanket (essential) and yoga mat (if you have).
No previous experience or knowledge required.

Booking is essential and places are limited to only 20 people.

And now for some background information on the masterful maestros 🙂

Dave Reynolds is SA’s leading steelpan player, a SAMRO Award winning composer and acoustic guitarist. His musical travels have taken him on five separate pilgrimages to the Himalayas as well as France, Mozambique, Germany, Namibia, the UK, Zambia, India and Botswana.

Dave has performed and recorded all over the world with the late Hugh Masekela, Andy Narell, Paul Hanmer, the late Gito Baloi & Steve Newman (of Tananas), the late Sipho Gumede and McCoy Mrubata to name a few. His solo album “The Light of Day” was nominated for a South African Music Award for Best Instrumental album.
Ronan Skillen is SA’s leading tabla and digeridoo player. His musical travels include visiting Australia to learn from the Aborigines about the origins of the didgeridoo, the art of playing and the culture surrounding it; studying the tabla (Indian hand drums) in India under the tutorage of Ustad Akram Khan, visiting Ghana and studying African drumming and doing a residency in Switzerland.

Together Dave & Ronan have performed, conducted workshops, and facilitated music therapy sessions in Swaziland, Joburg, all over the Western Cape and at the SA Music Awards in Sun City.