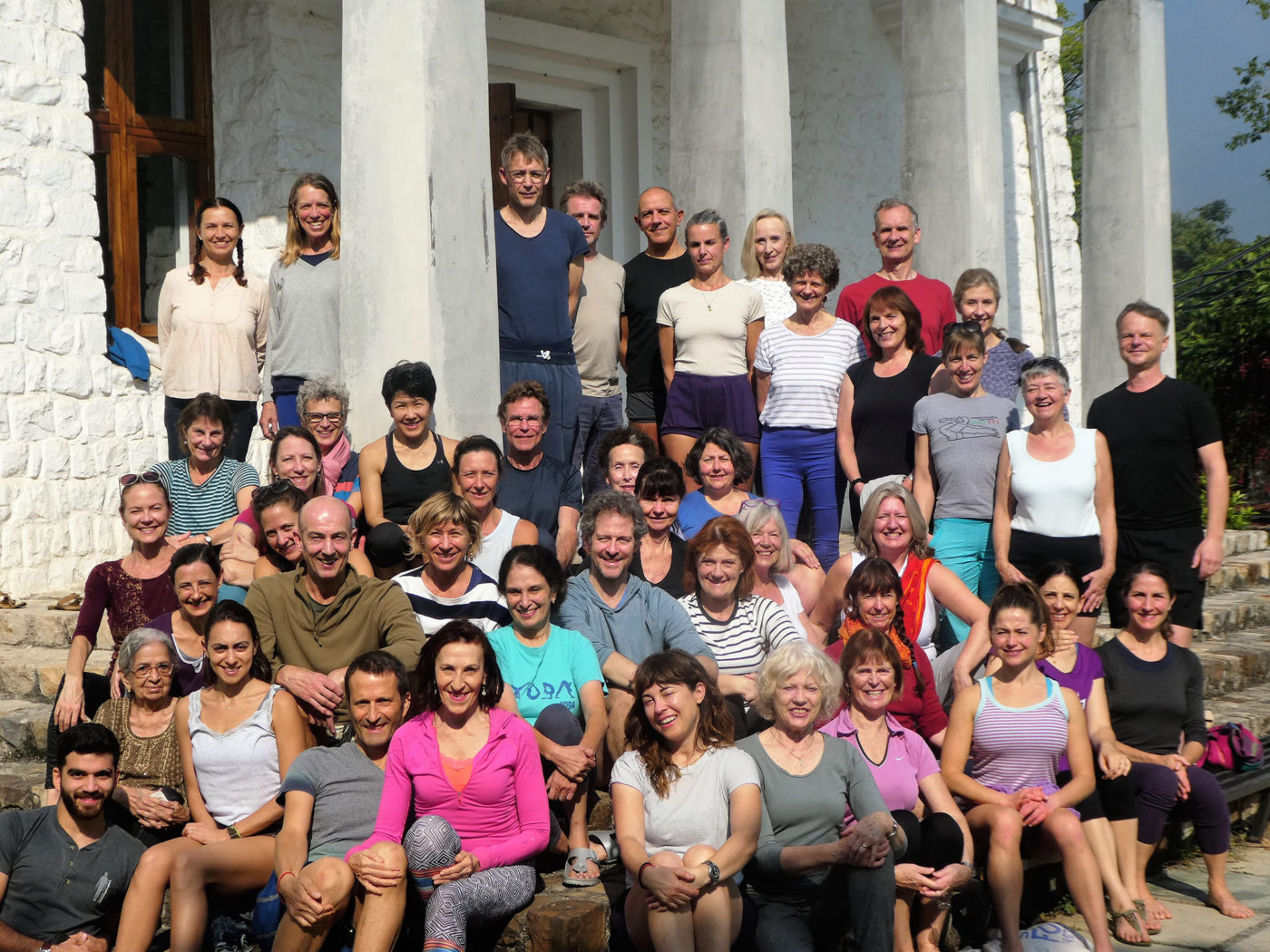 When I first heard about the intensive that Firooza was teaching at in Dehradun in India in November 2018, I immediately signed up. I had heard about it not long after the course she taught in Cape Town in September 2017 and I was still totally awestruck by her. Five of us from Cape Town registered and headed off to Rishikesh for a few days first. Everything I had heard and seen online about Rishikesh, didn’t really prepare me for the reality of being there. It’s like nothing else I have seen in India (granted I haven’t travelled extensively in India), the air is clean, cars are not allowed in most of the narrow lanes but there are still a number of tooting scooters especially across the Laxman Jhula Bridge, one of the main and busiest bridges that crosses over the Ganges. Rishikesh is the hub of all things yoga in India and there are numerous ashrams, yoga halls and yoga schools. You can’t walk more than 100m without passing one of the them, let’s just say yoga is prolific in Rishikesh. It is a fascinating place, Sadhus roam the streets along with all sorts of Westerners there to study, train to become a yoga teacher or to “find” themselves and there are, of course, so very many cows. We spent our first days exploring the narrow roads and lanes filled with an exotic, colourful assortment of all things yoga as well as beautiful fabrics and so many bookstores with such interesting (and cheap) books an all aspects of yoga, Eastern spirituality and philosophy. No sooner had we become accustomed to the leisurely days spent alongside the limey green of the Ganges doing yoga, hanging out at coffee shops and shopping, and then it was time to leave.

The intensive was held at the Tarab Ling Institute which is a Tibetan Buddhist Centre near a bustling city called Dehradun not far from Rishikesh. Dehradun is in the north of India in the Uttarakhand province, and Tarab Ling is in the countryside between Dehradun and Rishikesh, it is surrounded by farms, fields and in the distance tall mountains and the hill station of Mussoorie which is just before the foothills of the Himalayas. The accommodation was very typically Tibetan-style architecture with each “house” accommodating 16 people in 8 twin rooms with en-suite bathrooms in two levels. There were about 40 of us from South Africa, England, Scotland, America and Europe. Joining Firooza was her elderly but impressively alert mom as well as her son. Most of the group from the UK have been having annual workshops with Firooza for many years, so it felt like we were part of a very large family affair.

In the first session, Firooza set the theme for the intensive by asking us to explore the difference between our sense of sight – where we perceive the seen and known world and ourselves – and our sense of perception – to feel and experience the unseen within ourselves. This set the tone of our asana and pranayama sessions, to perceive our internal selves and universe by being aware of the spaciousness and sensitivity that can be created through breath.

The days started with pranayama followed by breakfast in the dining room which overlooked the grounds. Asana followed by lunch with a few hours in the afternoon to chill, do washing, make notes or nap :). The evening session was a restorative session and mostly followed by really interesting sessions on philosophy where Firooza shared her deep understanding and vast knowledge of the sutras and Eastern spirituality and philosophy. In these sessions, Firooza either discussed some sutras at length or answered questions that students had submitted. She also dedicated one night to a detailed discussion about menopause which was very interesting. I loved these sessions because of the gentle and thorough way she explains everything in such detail.

Midway through the intensive, was the festival of Diwali, the Hindu festival of lights. The houses down in the valley were all lit up at night making for a magical night view. On Diwali day, we only had a morning session and then we split up and different groups went on various outings. One group went to Rishikesh for the day, some people stayed at Tarab Ling and rested. We went on a “trek” up to the town of Mussoorie, which was really a seriously long, hot trudge up a narrow jeep track hugging the edge of one of the many steep cliffs leading up to the historical hill station. At the top, we were awarded with the most spectacular views. The Mall Road which is one of the main roads that winds along the top of the town, is lined with a charming variety of clothing and fabric stores, coffee shops, restaurants, sweetie vendors and hotels. The downside to this picturesque town was the incredibly windy drive up and back down to the valley and Tarab Ling, not for the faint-hearted. The next day, our routine resumed and everyone felt a little refreshed after the break.

Since the majority of us were teachers, she pointed out that she is not insisting that we work hard, she assumed we were all doing our best, but to rather work without strain and exhaustion and deepen the practice through our breath. Firooza is apparently, very influenced by Prashant’s style of teaching in that respect. I personally really benefited from this approach and learned so much about my own breath and body. As teachers, we do talk about the breath – queuing our students when to breathe in and out – but she managed to guide through awareness of our breath and posture to a state where the brain and mind become quiet and receptive, and in that moment of sensitivity and intelligence is where you begin to perceive and experience what more is possible. We worked very deeply in the asana classes. In the pranayama sessions we synchronised the sounds of the chakras silently with our inhalations and exhalations, feeling the various sensations of the different words. Later on in the intensive, we silently repeated the sounds of vowels associated with each chakra. The resulting experience is a sensation of vibrancy felt along with the movements of the breath. This created a sense of spaciousness within the boundaries of the physical body and even these became permeable creating a sense of connectivity to the outside. We also did a lot of work with the breath and kriyas – which means action. Firooza also encouraged us to be the observer and not the doer, to allow the practice to happen though the shape of the pose and the breath.

At the end of the 10 days, it felt like we had, as a group and individuals, accessed a part of ourselves which was both intimate as well as universal. I felt rinsed and refreshed internally, mentally and physically. It was the perfect way to end off my year of teacher training, to be exposed to such a different and refined way of practising and also to share such deep and wonderful insights into Samkhya and yogic philosophy. It never ceases to amaze me, this global Iyengar community, how we can come together as strangers and be united by the vision and teachings of one great Guru, how vastly his teaching has been spread, interpreted and then shared some more. A special thanks to Kirsty MacGregor and Sara Trevelyan for all their hard work in organising the intensive as well as to Norbu, the infinitely patient and peaceful manager at Tarab Ling.

From Tarab Ling, Debbie and I moved onto the next stage of our Indian Adventure – trekking in the Himalayas.
But that is a post for another time.
Come back soon to read all about our journey into the snow!